Due to the blog largely being me sharing pictures of my models, I am going to point to my Instagram as where I primarily share my on-going efforts.
I may return here at some future date.
Posted by Rob on April 27, 2021 No comments:

Email ThisBlogThis!Share to TwitterShare to FacebookShare to Pinterest
Labels: admin


Easy update this week, finished off a pair of Avengers to support the Valkyries and Vultures.  The model is fun and has some natural lines to it, making painting it straight forward.  This finishes up my Imperial Navy aircraft, at least until they add more.

The Avenger and Vultures are the first Imperial Navy aircraft at this scale that were not in the first Aeronautica Imperialis iteration.  I like them as a niche aircraft, but that makes them very scenario driven.  In generally that is something my games have missed - reasons to take aircraft other than primary fighters.

Up next, not sure.  The Ork Megabommer is sitting in front of me; I have Titanicus terrain to continue to work on; 4 aircraft support Adeptus Titanicus in various ways, and a slew of unbuilt plastic and resin.  Not sure yet.

More full update, since it has been a few weeks.

Following up from these guys I am working on some Aeronautica Imperialis.  I have assembled my Ork Mega Bommer and it is definitely a big model.  IN addition, I am going to paint up 2 Avengers in support of my Imperial Navy Valkyries.

When I finish up these aircraft, I think I will also paint up a second pair of Avengers and a second pair of Arvus Lighters.  These two pairs will be painted up using traditional paints and are aimed at being used in Titanicus instead of Aeronautica!  I think I am going to eventually integrate the flight of Avengers into Titanicus, as they might fill a similar niche as some Knight Banners but in a very different way.  More to come on that front.
Posted by Rob on February 16, 2021 No comments:

Forum built, some work on Knights

Last week, I finished building my design for an Imperial Forum.

Imperial Forums are seen across the 500 Worlds of Ultramar and occasionally on other worlds brought in to compliance by the XIII Legion of the Emperor's Great Crusade.  These Forums provided opportunity for the inhabitants of the world to engage in debate about local law and engage in public trials of those continuing to push against the new order.  Often the first trials held in a finished forum were the remaining potentates of the world's Ancien Régime.

Rain started this weekend, delaying priming of the Forum itself.  I have put my attention towards painting up the 4 Imperial Knights (see in these shots post priming).

Short update this week.  Lots of Titanicus related hobby work going on this past week/weekend, cumulating in the priming of the Basilica.  I got in my order of plasticard and picked up vinyl pieces of tile for the base.
In parallel, I have started work on the adjacent forum to the Basilica.  After embarking on building a set of pyramid corner stairs, I hve decided to abandon it in favor of straight stairs up that are recessed into the overall structure (vs sticking out a lot).  I will probably share the built forum next week.
I also salvaged 3 Imperial Knights and built a fourth for my House Vornherr detachment.  These also got primed.
Posted by Rob on January 19, 2021 No comments:

About six months ago, I drew up a plan for a large building for Adeptus Titanicus.  Initially, I wanted something cathedral like, but that does not fit with the idea of the Great Crusade's Imperial Truth and the 500 of Worlds of Ultramar.  I needed something that invoked both the scale and grandeur of a cathedral, but with an entirely secular purpose - enter the Basilica, in the Roman tradition."The Great Crusade-era (M31) Imperial Basilica serves as a hub of post-compliance activity.  It houses multiple Imperial offices to further integrate a world into the overall Imperium of Man.  It also serves as a hub for mercantile activity, providing a safe, neutral environment for off-world traders to interact with local nobility, merchants, or industrialist.  The offices of the Basilica include local language to/from Low- and High-Gothic translators, money exchangers, local and Imperial legal scholars, and other pertinent services to enable integration of the world's region into the broader context of the Imperium."
Importantly, the Basilica is not an Imperial Governor's Palace.  The Basilica and its services would evolve to be the Adeptus Administratum.  On worlds that became more regressive in the wake of the Horus Heresy, the individual Basilica would transform into cathedral fortresses, their often neighboring Forum turned to landing pads for Valkyries and Vultures.  Only in some sectors of the Imperium, like Ultramar, would they retain a semblance of their original purpose.

Over the holiday, I hung out at my brother's home.  I played with with the 3D printer, focusing on printing a bunch of Imperial Storage containers for Titanicus terrain projects.

I also received some models as gifts.

When I got home, I decided to finally start building the Basilica I have designed for Titanicus terrain. 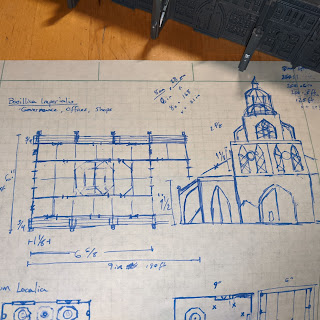 I am taking two weeks of downtime over the end of the year/holidays.  One of my goals is to do some hobby work each day.  I am also at my brother's home for the two weeks - trying to work on me.

Last week and yesterday, I worked on and completed my Aeronautica Imperialis Valkyries and Vultures.  I decided to use some of my Titanicus transfers for Legio Gryphonicus for Squadron heraldry.  I like the idea of a Navy Air Wing's ground assault group/squadron thinking of themselves as Griffons.

Next project is getting the Blood Bowl Season 2 Box built, maybe even painted. 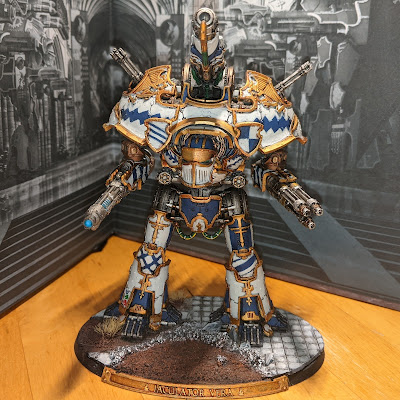 I did complete the Warbringer over the Thanksgiving break and then promptly dove into a side project of two Slave Ogres for Necromunda.  Up next, Valkyries and Vultures for Aeronautica.

I think the Warbringer brings my total Titanicus force to around 2,000 pts.  It also means I can field 2 Maniples in a fight, before adding any Knight household support.  Still looking at adding a Psi-Titan when they are back in stock as well as some more Reavers and Warhounds.

The Ogres were great to do as a side project, totally changing up the color pallete to bright orange, green, and purple flesh tones.

Again, up next is 4 Valkyries and 2 Vultures in colors similar to the Marauder Destroyers painted previously. 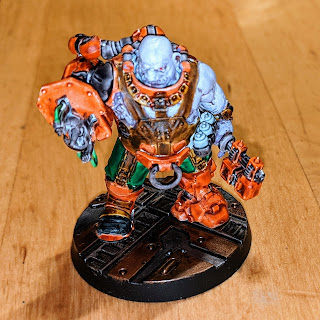 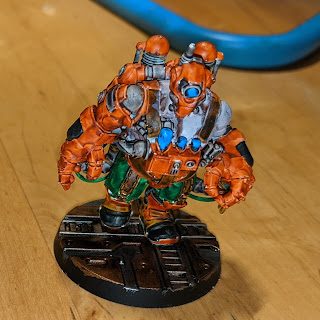 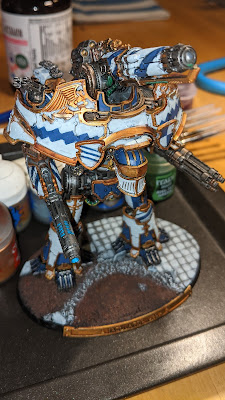 Basic update. Slow progress, adding layers to the Warbringer after washing it in Nuln and Reikland shades.  Really all that remains is to do some additional metallic layers and then sealing.Part of it is realizing when I have completed a model such as this one.  I have added lots of detail.  Making the metallics pop more and adding some weathering on the top reactors seems about right.
Following this model, I still have not really decided what to dive into next.  I have a pair of Ogres and a bounty hunter for Necromunda, which will be good changes of pace in terms of scale.  They will also be good for heavy contrast use.
I also want to dive into big terrain projects for Titanicus after that. 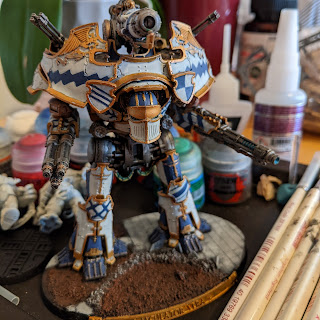 Pretty simple update this week.  I have been steadily adding the base colors to my Warbringer-Nemesis.  Up next is washing the miniature before adding another layer of each color and then highlights.  I estimate it will be done this weekend - which will mean I should choose something to dive into for the week of Thanksgiving. 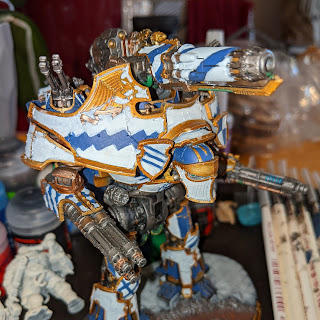 This weekend, I had a little progress in terms of assembling and priming some Orgyns Servitors for Necromunda.  However, on Sunday, I took a solid two hours and spent it assembling the Lego Lunar Excursion Module (LEM).

I really enjoyed the build.  It was an opportunity to escape the kitchen table/COVID office and take over my son's room for 3 hours (while he continued to monopolize the gaming computer).

A Pair of Lighters

This past week, I painted up a pair of Arvus Lighters for Aeronautica.

I tied them into the rest of my Imperial Navy Air Wing via the blue sections on each wing and yellow lambda and mu markings.

I own another set of Lighters that I plan to paint up as being part of the Ultramarine Legion's administration of the 500 Worlds of Ultramar, but that will be a little bit before I get to them.  I have not yet settled on what I will paint next, either dive into Imperial Navy Air Wing attached to Astra Militarium, ie Valkyries, Vultures, and Avengers or paint up my Warbringer-Nemesis.

In focus, nose art of Marauder 13, the Emperor's Own This past weekend, I finished up the Marauder Colossus.  It was a fun convers... 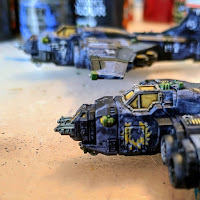